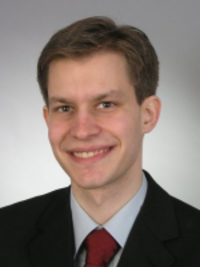 From late 2000 to 2004 I studied mathematics and computer science at the University of Mannheim. The emphasis of my studies was on communication networks, computer graphics, and statistical pattern recognition. During this time I also worked as a CEO of MASH Computer Systems GmbH, Heddesheim, and as a software engineer for Solution -- The Computer People, Mannheim.

Since January 2005 the main focus of my research has been on Mobile and Vehicular Ad Hoc Networks. In spring 2007, I visited the Computer Laboratory at the University of Cambridge, UK. I received my doctoral degree from the Heinrich Heine University in December 2007. My thesis, entitled "Reading Between the Packets - Implicit Feedback in Wireless Multihop Networks", was awarded the prize for the best doctoral dissertation by the Department of Mathematics and Natural Sciences.

From August 2008 until March 2011 I was a Junior Professor at the Heinrich Heine University.

In April 2011 I moved to the University of Würzburg where I became an Associate Professor.